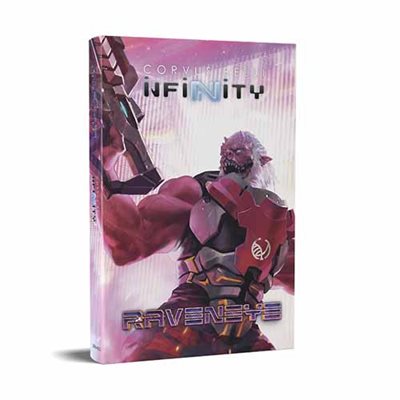 The assault on the Raveneye Orbital Complex, a defensive military compound disguised as a communications relay station, has been the key to opening the way for the Morat Aggression Forces’ deployment in the Durgama region, and has furthered the Combined Army’s conquests on Concilium Prima, the political heart of the Human Sphere. What could possibly be so important to the almighty leader of the Combined Army? Or could it be just another smokescreen to divert the attention of the Concilium Coordinated Command?

The book “Infinity: Raveneye” is an expansion for Infinity that broadens its universe and background, focusing on the Military Orders of PanOceania, Ariadna’s Kosmoflot and its new territory of Khurland, the Nomad mothership Corregidor, and the Morat Aggression Forces of the Combined Army, as well as mercenaries for NA2. It also includes three narrative scenarios that recreate the assault on this orbital station, which can be played as a campaign or independently, in addition to painting tutorials for the Military Orders’ Crosiers, Corregidor’s Intruders, Kosmoflot’s Para-Commandos, and Morat’s Vanguard Infantry. Connect now and lead your elite force into the most dangerous war zones of the Human Sphere!