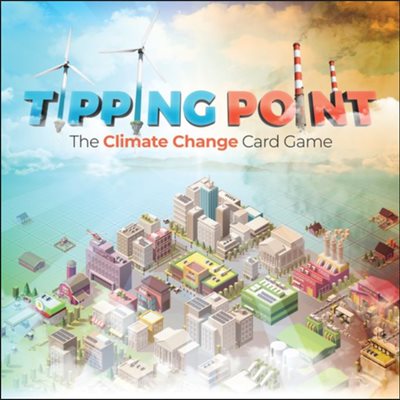 Tipping point is like SimCity with cards. Players build cities while trying to survive extreme weather disasters that become more and more common as carbon dioxide accumulates in the air. It's a family-friendly game perfect fit for casual and strategic gamers. It's also a great choice for teachers looking for a visual way of introducing their students to climate change.

The goal of the game is to grow, sustain and protect a large population. Players take turns pulling new citizen cards and purchasing new development cards to add to their city.

Each citizen has his or her own special interests, including the construction worker who can help you build your city, the educator who can teach your workers to use advanced technologies, and the solider who can help protect your city from outside attack.

One of the best parts of Tipping Point is that players can use their imaginations to build the type of city they want. There are dozens of different development cards to choose from, including oil wells which earn more money, hospitals which protect citizens from extreme weather, or power plants which are needed to power buildings. But this growth and development comes at a cost: the release of greenhouse gases, like carbon dioxide (CO2).

The end of the game is triggered when 1 player reaches a population of at least 9 citizens. Therefore, it is possible (but very difficult!) for all players to win.