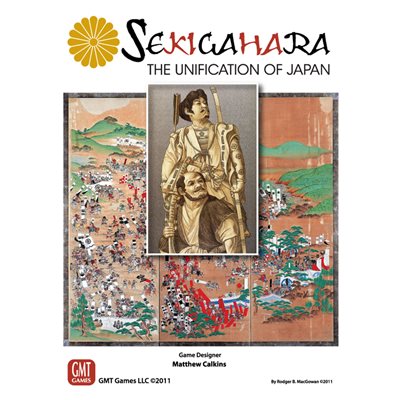 Sekigahara is a 3-hour block game based on the Japanese campaign waged in 1600. The 7-week war, fought along Japan's two major highways and in scattered sieges and backcountry skirmishes, elevated Tokugawa Ieyasu to Shogun and unified Japan for 265 years.

Sekigahara is designed to offer an historically authentic experience within an intuitive game mechanic that can be played in one sitting. Great effort has been taken to preserve a clean game mechanism. (Despite a healthy amount of historical detail, the ruleset is a brief 6 pages.) Chance takes the form of uncertainty and not luck.

No dice are used; combat is decided with cards. Blocks = armies and cards = motivation. The combination of army and motivation produces impact on the battlefield. Armies without matching cards don't fight. Battles resolve quickly, but with suspense, tactical participation, and a wide range of possible outcomes.