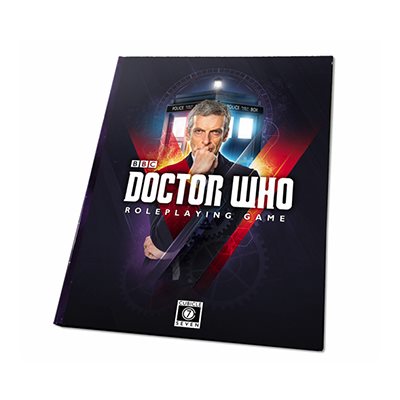 Imagine you could go anywhere. This world or countless others, encountering strange alien races, new cultures or hostile environments. Now imagine you could travel to any time. Meet Robin Hood (and duel him with a spoon!), discover what terrible monster lives under your bed, journey inside a Dalek or travel to the end of time itself. Where would you go?

With Cubicle 7's Doctor Who: Roleplaying Game, the power is in your hands! You can go anywhere or anywhen in the universe. It's not going to be easy. It'll probably be dangerous. The universe is a hostile place, full of Daleks, Zygons, Sontarans, the Boneless, Cybermen, Clockwork Androids, Silurians and worse. There will be fear, heartbreak and excitement, but above all, it'll be the trip of a lifetime.

The Doctor Who: Roleplaying Game is a set in the universe of the world's longest running science fiction show on TV - the BBC's Doctor Who. This limited edition hardback rulebook celebrates the 50th anniversary of Doctor Who, presenting all the rules and background you need to have your own adventures in time and space in a single volume, including:

- A brief history of time and space - a tour of some of the key moments in the history of the universe.
- Ready-made character sheets for the Twelfth Doctor and his companions, including Clara Oswald, Danny Pink, Madame Vastra, Jenny and Strax.
- A complete set of rules for playing the game.
- Rules for creating your own characters, gadgets and more.
- Rules and background for some of the Doctor's most infamous enemies - including Missy!
- A guide to creating your own adventures, as well as three new adventures.
- All-new imagery from the latest series.
- And much more besides!

The Doctor Who: Roleplaying Game has been written to appeal to both the experienced and first-time gamer. The game is suitable for 2 or more players aged 10 to 1200.