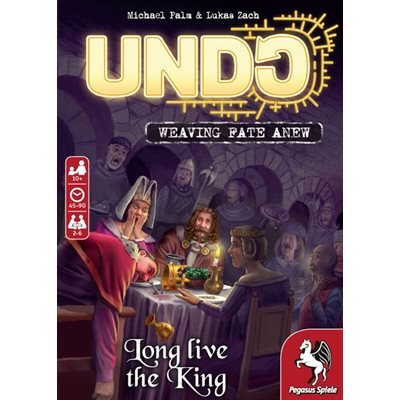 The Royal Banquet, September 1256: Despite the sumptuous dishes, tension fills the air of the great hall. Numerous guests had accepted the invitation to the funeral service for the late queen, and now await the mourning king’s eulogy. After all, he is now without an heir to the throne – and many of those present sense an opportunity for themselves. When the king finally rises, there is a hushed silence. He raises his goblet and lets his keen gaze wander from face to face. “Few of you are here to mourn my beloved wife with me,” the king begins, and takes a sip from the goblet. Suddenly he begins to cough and puts his hand to his throat. He collapses, knocking food from the table. A murmur goes through the crowd as orders are shouted frantically for aid. The king is carried out of the hall in a hurry, and minutes of dismay pass. Then the personal doctor emerges and announces to all, "The king is dead!"

In UNDO – Long Live the King, players learn the rules and encounter the starting situation of the case on the first few cards, which also guide them through the setup. Once the setup is complete, players carry out nine time jumps. Every jump takes them to one independent moment from the past and allows them to change that moment in one of three ways, which may change the starting situation for better or for worse. The players need to discuss what they know and try to come up with theories about the story, using the clues they gather from the different time jumps. Only by continuously adapting their theories and making the right choices will they successfully change fate and save the life of the king.