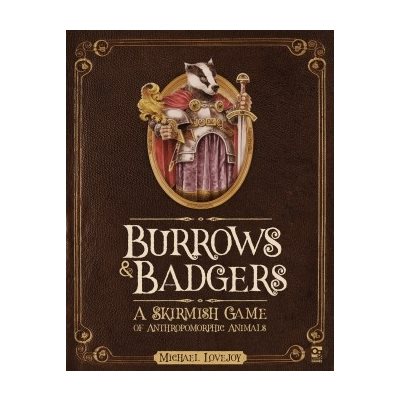 Press and move to zoom.
Mouse over image to zoom.
Click to enlarge
Osprey Games

The Kingdom of Northymbra is a land in turmoil. King Redwulf is missing, and his son rules as regent in his stead, facing threats from within and without: growing dissention among the knights and nobles of the realm, whispers of revolution from the Freebeasts, Wildbeasts encroaching on the borders, and bandits of all stripes making the most of the chaos.

Burrows & Badgers is a tabletop skirmish game set in the ancient realm of Northymbra, a kingdom where mice, badgers, toads and other animals wear armour, wield swords, and cast magic spells.

Your tabletop becomes part of the Kingdom of Northymbra, whose ruined villages, haunted forests, and misty marshes play host to brutal ambushes and desperate skirmishes. Lead your warband from battle to battle, and uphold the name of your faction, whether you stand with Reinert's Royalists, the Freebeasts of the Fox Families, or simply for your own glory or survival.

Each model in Burrows & Badgers represents an individual character, and can be selected from a wide range of species - from the humble mouse to the mighty badger - and armed and equipped as desired. Scenarios link into ongoing campaigns, where heroes and villains may make their names and the assistance of infamous mercenaries might mean the difference between victory and defeat.