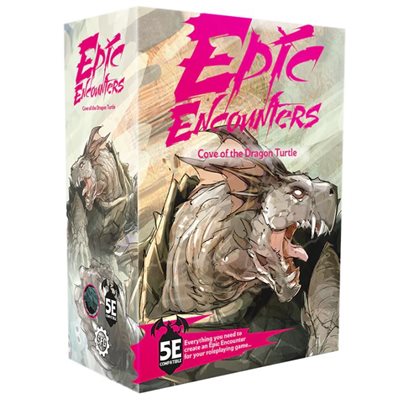 Pit your roleplaying group against a titanic dragon turtle with this Epic Encounters boss box! Compatible with fifth edition or any fantasy roleplaying game.

Whispers travel across the seas of a titanic beast that dwells in the depths. A snapping, snarling chaos that surges from beneath the waves to snatch its prey. Some speak of these monstrous predators singing to one another with haunting, wordless ululations crooned over silent seas. Others of slow death; victims kept alive to be consumed limb by limb. Sailors give it many names — old grim teeth, the living island. No matter the name, or the language it’s spoken in, all sailors fear the dragon turtle.

Many feared creatures lurk in the dark places beneath the waves… But none are as feared as the dragon turtle. These colossal sea-dwelling beasts have the shape of a turtle, but ten times the size, and the mind of a dragon, wise and treasure-hungry. This may well be your sternest test yet.

Inside this boss box is everything you need to challenge a dragon turtle, including a large, highly detailed dragon turtle miniature (110mm base!) and an adventure book woven with information to fuel your imagination. It’s up to you to discover which rumours and whispers are true!

Can you defeat the dreaded dragon turtle, or will you end up sleeping with the fishes?