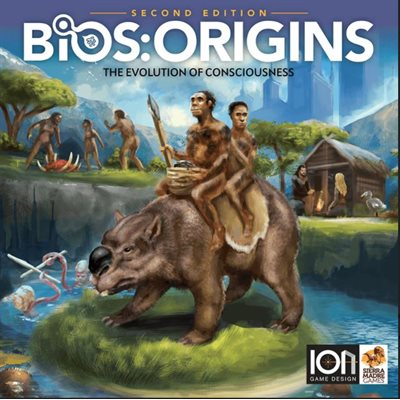 Bios:Origins is the 3rd part of the Bios Trilogy. The action starts much earlier than most Civilization games: 200,000 years ago or even earlier. One to four players represent the human subspecies extant at that time: Sapiens, Neanderthal, Denisovans, & Hobbits. Take them on an adventure to enlarge your brain, acquire language, discover new worlds, domesticate strange beasts (such as riding war kangaroos or mammoths), discover the wonders and terrors of religion, dive for pearls, challenge the gods, enslave rival hominins, and perhaps enter the Enlightenment. Although wars of conquest and religion are possible, most of the fighting will be internal. You have only limited control of over your ruling class, and if your priests are in control and do a poor job, they will get killed and usurped by merchants or warlords.

Win by specializing as cultural, political, or industrial civilization. This means, unlike most civilization games, that a cult figure on a mountaintop in New Zealand can win over an Emperor that has swept the globe with his armies.

The game integrates with Bios:Genesis and Bios:Megafauna, so that you can start as a variety of intelligent but not-quite lingual marine or terrestrial creatures. Two maps and 26 hex chits are included, to accommodate variable landforms and cratons on habitable Earth, Mars, or Venus. Solitaire and cooperative variants are included.