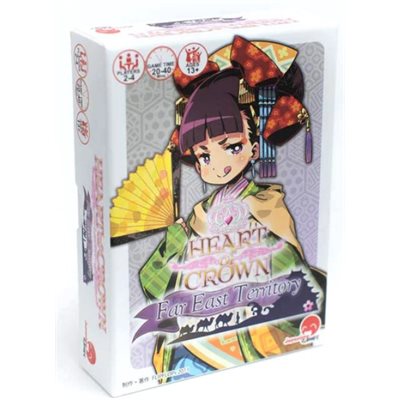 Press and move to zoom.
Mouse over image to zoom.
Click to enlarge
Japanime Games

The Far East Territory expansion requires the base game to be played and may be integrated with other Heart of Crown expansions.

Some notable cards: – Greedy Fairy (lets you stockpile coin counters, and also move counters around between different types, eg 2 gold -> 1 succession point) – Taxation (lets you put a taxation token (new token type) on a card in the market to increase the cost to buy it until the stack in the market is sold out – can really mess other player’s strategies!) – Apprentice Witch (gives players without a curse card in hand or top of deck, a curse card, then lets you draw two cards and keep one) – Samurai (removes a cost 4-5 card from opponents hands and they’re put aside until the next time they have to reshuffle their discards to create a new deck, can also ruin someone’s strategy quite nicely) – Kunoichi (defense card that can block an attack, but also can clone herself into any card in an opponent’s keep and acts as if she’s that card, taking advantage of another player’s keep strategy) – Mining Town (gains you Ore tokens when purchased, which when you play the card can be used to get free cards up to cost 5 from the market)