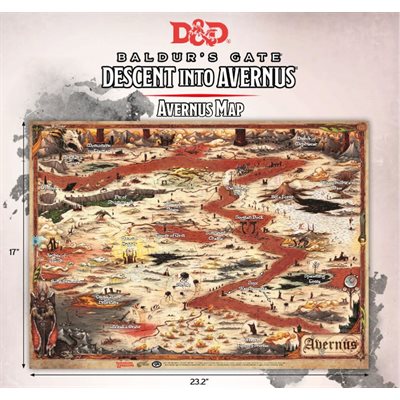 Press and move to zoom.
Mouse over image to zoom.
Click to enlarge
Gale Force Nine

The poster map depicts a region of Avernus, a wasteland of dizzying proportions that has been warped by eons of demonic invasion. Travelers face a hellscape that disorients the senses and defies attempts to map it accurately. Standard cartographic methods are useless, since distances in Avernus are impossible to gauge and locations sometimes shift supernaturally. As such, the map shows pictorial impressions of locations that only hint at their distances from one another. It is by no means something that can, or should, be taken literally.
No scale is marked on the map, and the placement of locations is based on the memories of an intrepid yet insane cartographer.