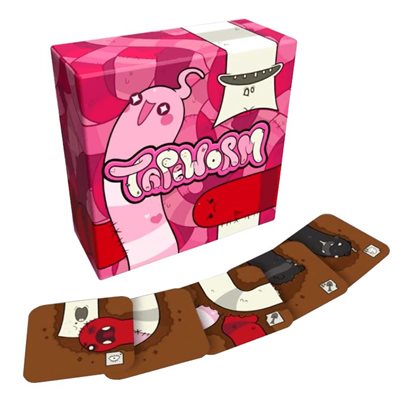 From designer Edmund McMillen, Tapeworm is a game in which players compete to build tapeworms and empty their hands of tiles, in the form of cards.

The game begins with the laying down of the starting tile, which depicts the kinds of tapeworms stitched together. The first turn is either determined by who resembles a worm the most or at random. A player's turn includes the drawing and laying down of matching tiles, which continues until a matching head segment is laid down, thereby completing the tapeworm. Whichever player ends up with an empty hand wins the game.

There are special mechanics to propel a player forward, as well as cards intended to hinder the efforts of their opponents. These cards include: Cut, to sever a worm segment at play; Peek, to draw a card and replace it with another card from a hand; Hatch, to force an opponent to draw from the deck; Swap, to look at an opponent's hand and decide if cards should be traded; Dig, to draw a card from the deck and discard one from a hand. If a player creates a fully-connected ring of cards, it is identified as a Ringworm, resulting in the discarding of two cards from a hand.