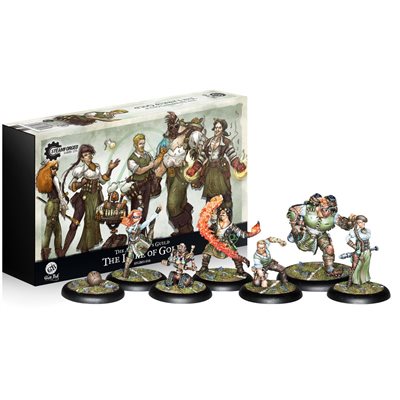 “You wish for some wisdom on the Alchemists? Stay clear of the green smoke and get ready to run when the flasks start to fly.”
— Obulus, Mortician’s Guild

Roiling inside Midas is an unquenchable desire for power. Driven to madness by his acrid ambitions, he’s quick to exploit chaos of flames and smokes on the pitch. At all costs, avoid his touch—it dooms all to the burdens of ruin.

Midas and his Alchemists engulf the pitch in deadly fumes and flames. These toxic effects quickly choke team movement, letting Midas score with his deceptive speed. Coaches who want to lick opponents with the fires of aggressive positioning will enjoy maiming their opponents with this toxic team.

Warning, not a toy! Not for use by children under three years old.  Note: These metal miniatures are supplied un-assembled and unpainted.