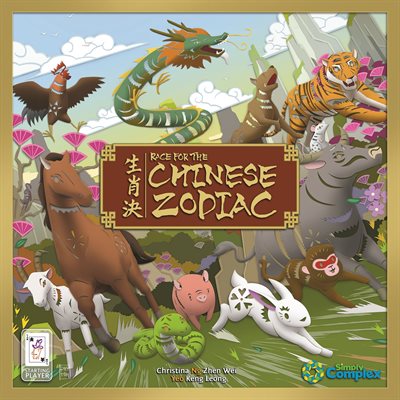 Race for the Chinese Zodiac

The first animal to complete the race earns the coveted right of having the first year of the Chinese Zodiac named after it!

The Jade Emperor has created a 12 year cycle to help mankind tell the years apart! But now to decide what animals are chosen, the Jade Emperor is holding a race on his birthday. The first 12 animals to cross the line will have a year named after them, in the order of how they finished the race.

Race for the Chinese Zodiac recreates The Great Race by having each player use their hand of eight action cards (numbered 1-8) as well as energy cards of different values and karma tokens. All players place their animal token on the start space of the racetrack. Players assemble the dual-layered and double-sided action wheel that's used to determine the effectiveness of each action and place it in the center of the table.