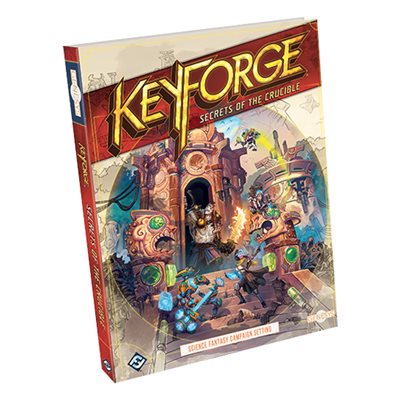 In the center of the universe hangs the Crucible, a gigantic artificial world created by the enigmatic Architects and home to countless beings and cultures. Here, impossibly advanced technologies mix with arcane powers to make for a setting unlike any other! Using the Genesys Roleplaying System, this sourcebook allows you to undertake fantastical adventures and uncover the Crucible's many wonders and dangers. Lost civilizations, cryptic conspiracies, bizarre environments, mutated monsters, and more await!

• A guide to the Crucible and areas such as Quantum City and the World Tree, along with Logos, Star Alliance, and other factions.

• Character creation options for playing species such as Elves, Giants, Martians, and Saurians with new careers like Æmber-mancer and Vaultwarrior. You can even custom-evolve your own to play a new species never-before-seen on the Crucible!

• New skills and rules for using the mysterious substance known as Æmber to craft powerful abilities and items.

• Adversaries including creatures, demons, and other inhabitants, plus Archons and other legendary individuals of the Crucible.

• A Crucible Adventure Builder for fashioning your own exciting encounters, from vault battles to high-tech heists and more - on the Crucible, anything is possible!