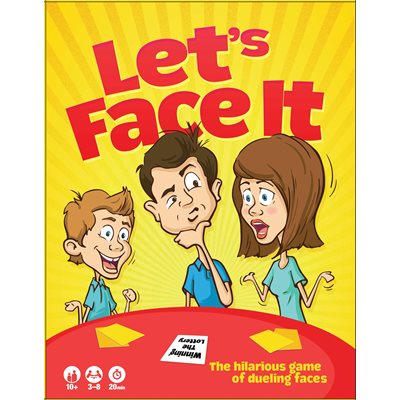 Lets's Face It is the exciting family game were players race around the board with the first player to cross the finish line is the winner.

Each round, a player will flick the spinner to chooses an opponent to Face Off against. During the Face Off, a card will be revealed and both players in the Face Off will have five seconds to pose themselves to express what is written on the card. Winning the Lottery, Scoring the Winning Goal, Smelling Onions. Players who are not part of the Face Off choose the winner who gets to move his pawn closer to the finish line. Where the player lands on the board can cause the player to Lose a Turn, move your Pawn forwards or even backwards, or could cause the two players to have a Rematch.

1. Spin The Spinner to Pick Opponent
2. Draw A Card (ie. Winning the Lottery)
3. Both Hold Your Best Facial Reaction to The Card
4. Then Other Players Pick the Winner After Some Debate

This game will have everyone laughing out loud because, Let's Face It!, this game is hilarious.