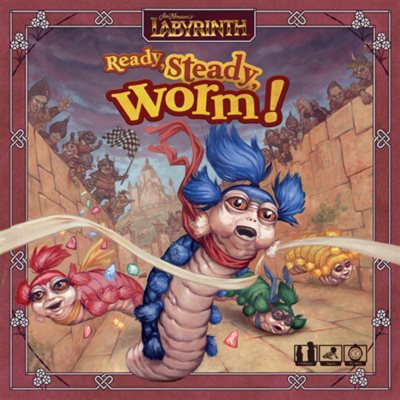 Ever wondered what the worms get up to in the Labyrinth?
Well wonder no more, as you join them for a very serious game of Ready, Steady, Worm!
Four worms enter… four worms leave. But only one worm can be the winner of this exciting race to the edge.
Get ready to collect gems, use goblin-tricks to tip the odds in your favor and remember, the Goblin King can twist everything in an instant by spinning the walls and changing the entire board.
Worm racing is one of the grand past-times of the Labyrinth, enjoyed by goblins of all ages. It is mostly used to settle debates such as: “Who gets the last Snæfbutle?”, “Which one of us gets to be called Smügle?” and “Did Pilch cheat last time we played Ready, Steady, Worm!?"