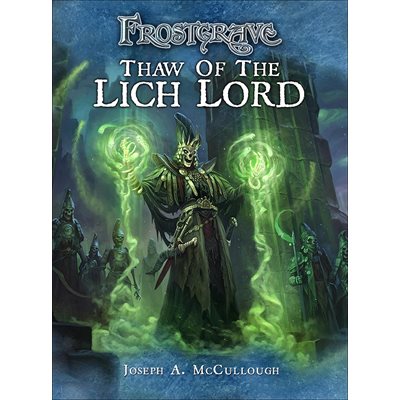 Thaw of the Lich Lord is a complete campaign for Frostgrave that will challenge both new and veteran players. Through a series of linked scenarios, players discover the existence of a new power in the Frozen City, one who was old when the great city was still young, and who saw both its rise and its disastrous fall. Warbands will confront the Lich Lord’s minions, race against his agents to seize possession of mysterious artefacts, and brave the perils of Frostgrave in search of his lair. Eventually, they will need to muster all their courage to venture into the depths of the city and face the Lich Lord himself. Not all wizards will seek to stop the Lich Lord, however, and full rules for giving into his corruption and following the dark road to becoming an undead lich are presented for those who crave power and immortality above all else. While the campaign presents many new threats against which wizards and their warbands must test themselves, including an expanded bestiary, it also offers additional resources, such as new henchmen that can be recruited and unique magical treasures that can spell the difference between survival and oblivion.”

Thaw of the Lich Lord is the first of what I hope will be a line of campaigns for the fantasy skirmish game ‘Frostgrave’. These ten linked scenarios, building in difficulty and detail as the players travel through the cold, dark and dangerous streets of Frostgrave, tell a long, doom-laden story about the dreaded Lich Lord, his awakening, and his terrible plans for the city he has been frozen in for more than a thousand years.

Not only does the book give you some great scenarios, you also get some extras for the Frostgrave game. There are new soldiers, the Bard, the Crow Master and the Javelineer, as well as the Pack Mule. New spells fill out the grimoires of the Witch and the Necromancer, and new Treasure gives new items for the warbands to battle over. New creatures for the bestiary include the Banshee, Blood Crow, Death Cultists, frost Wraith, The Ghoul King, Rangifer, Spectre, Wraith Knight, Zombie Troll and the dreaded Lich Lord himself.

Thaw of the Lich Lord is an excellent addition to the Frostgrave game. The scenarios are fun and creative, with extra rules here and there which are designed for the singular scenario but can be adapted to your own games, and the extra soldiers, spells, treasure and creatures are useful and quite welcome.