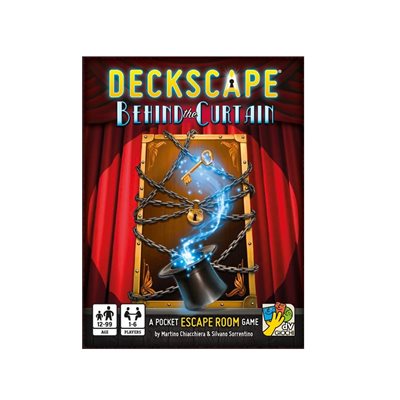 Deckscape: Behind the Curtain (No Amazon Sales)

Deckscape: Behind the Curtain is the fifth title in a series of cooperative games inspired by real escape rooms in which a group of people is "trapped" inside a room full of puzzles and odd items. The goal of the game is to solve puzzles, understand the plot of the story, and make intelligent use of the items provided in order to exit from the room as quickly as possible.

An anonymous envelope in your mail box contains free tickets for the sold-out last magic show of the great magician Lance Oldman; the show will take place tonight in New York. You cannot wait to go: a fun and carefree evening awaits you... but when you’re dealing with magic, you have to be ready for anything!

You take your seat in the audience and just when you start to figure out how some magic tricks are performed, an unexpected twist changes the course of the show!

Will you be able to unveil the magician’s secrets and amaze the audience by performing something unbelievable yourself?