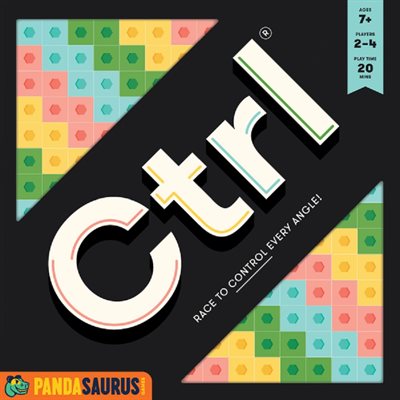 In Ctrl, players try to dominate a cube by crawling over it with their colored bricks, preferably covering other players' bricks along the way.

In more detail, you start with a 3×3×3 cube that has one block of each player color stuck into one of the cube's holes. (In a two-player game, each player controls two colors, but at the start of play they secretly choose one of those colors to be their scoring color, with the other color serving only as a blocking mechanism.) Each player has a matching colored flag that sticks out of their block.

On a turn, a player removes their flag from its current location, adds one cube of their color to the side of any of their blocks (where such a move can be made), then they "grow" their color by adding two blocks in a straight line from the block they just added, crawling around corners and covering other players' blocks if needed. To end your turn, plant your flag in one of your final blocks, ideally blocking where someone else might like to play while also preserving future ground in which you can play.

Once all the blocks have been placed, you calculate your score by looking at the structure from all four surrounding sides, as well as from the top, and counting each unblocked square of your color that is visible. Thus, if you plant a block high up on the cube, you can possibly score 5 points for it since it would be seen from all sides and the top. Climb high, and block others from blocking you!