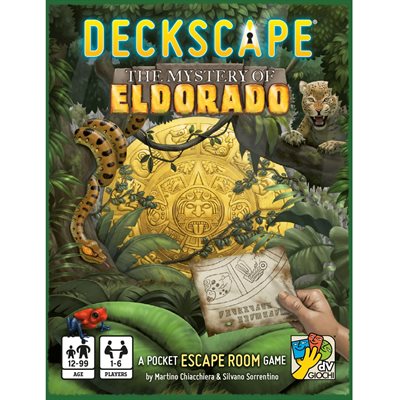 Deckscape: The Mystery of Eldorado is the fourth title in a series of cooperative games inspired by real escape rooms in which a group of people is "trapped" inside a room full of puzzles and odd items. The goal of the game is to solve puzzles, understand the plot of the story, and make intelligent use of the items provided in order to exit from the room as quickly as possible.

In Deckscape: The Mystery of Eldorado, you are a group of explorers, who have long sought the legendary golden city in the heart of the forest, without finding it. While you are flying back home, the head of a statue crashes against the plane and you have to parachute to safety! You are alone, tired and hungry, lost in an uncharted area of the forest. Danger is lurking, and you have only the few items you grabbed before jumping out. This could be your end...or the very last chance to unravel the mystery of Eldorado! Can you survive the pitfalls of the Amazon forest and find the legendary city of Eldorado?