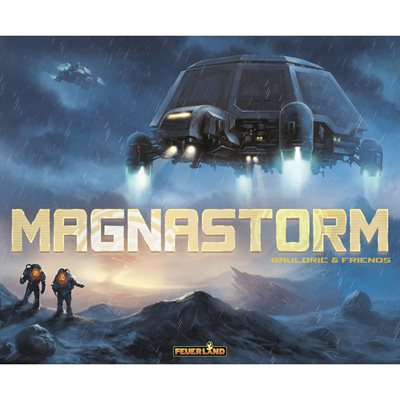 Magnastorm is a big, tactical board game with very little luck.

Choose the right moment to perform actions or buy influence over helpful commanders.You will reap success through resource management, clever logistics, good timing, and a shrewd eye on the actions of your opponents. At the end of the game, each player receives one of 120 reward cards, which can be used in later games to compensate for varying levels of skill among the players.

The goal of Magnastorm is to be the first player with a certain number of reputation points. You acquire reputation mostly through fulfilling objectives, taking control of one or more of the eight commanders, and building transmitter stations.

Magnastorm has very high player interaction, using an innovative action selection mechanism to constantly keep players involved in the action.  There is also a new handicap system to balance different player strengths so both new and veteran players can have an equal chance to win from the beginning, and makes strategy much more of a component.