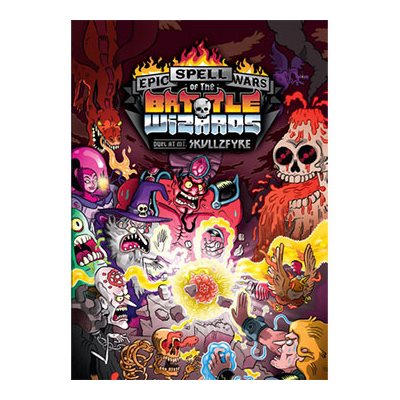 Did you know that magical wizards are battling to the death ... and beyond ... right now!? "Why battle?" you might ask. "What have I got to prove, magic man?" Only who's the most awesomely powerful battle wizard in the entire realm, that's what! As a Battle Wizard, you'll put together up to three spell components to craft millions* of spell combos. Your spells might kick ass, or they could totally blow -- it's up to you to master the magic. You will unleash massive damage on the faces of your wizard rivals in a no-holds-barred, all-out burn-down to be the last Battle Wizard standing. And it doesn't stop there! Powerful magic items bring on a whole new level of bloody carnage as you and your mighty wizard opponents tear each other limb from limb in an orgy of killing! Do you have what it takes to use epic spells in a war at Mt. Skullzfyre? Will YOU be the Ultimate Battle Wizard!?!

*Not actually millions of combos ... but like thousands or more, maybe.

- Combine spell cards into three-piece combos, creating hundreds of unique and devastating attacks. The chaos is limited only by your thirst for destruction!
- Super mind-blowing fun for 2-6 wizards!
- Dozens of Arcane Artifacts modify your spells and bring the ultimate pain to your wizard opponents!
- Dead Wizard card innovation keeps players in the game, even when they suck and die before winning!
- Simple to learn with endless replayability -- you'll be locked in deadly Wizard Combat till you've got a long, gross, goat-like beard!
- Amazing art with over 100 unique images, the world of epic spell battles comes to righteously hilarious life!
- Seriously, I'm not messing around, it's righteously hilarious...