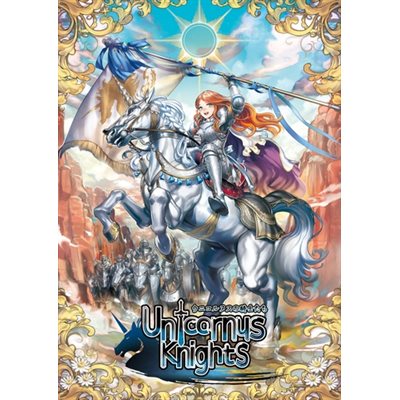 The Kingdom of Astoria has Fallen!

In a sudden and unprecedented move, Emperor Lionel of Legania and his dark forces moved in and conquered the peaceful kingdom. Only one member of the royal line survived. Princess Cornelia is young, without extensive knowledge of politics or military tactics, but she has a fire to retake her lands and restore peace to the people.

As her knights, advisors, and more, your job will be to ensure that Princess Cornelia reaches the throne and defeats the evil Emperor Lionel. However, the princess will not always make the wisest decisions as she moves across the map! Can you use your influence and power to clear her path, and ensure the kingdom is restored?

Unicornus Knights is a cooperative game for up to 6 players. Take on the roles of heroes who protect the princess using their unique abilities. The map is created randomly each game, so no two games are the same! And with varying “personalities” to use for the princess, Unicornus Knights will challenge you and your friends every time!