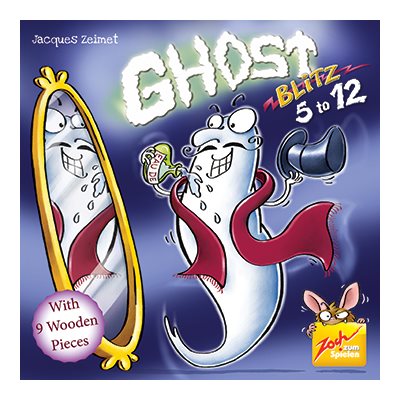 Ghost Blitz 5 to 12 is a variant of the popular reaction game Ghost Blitz for quick-witted players aged 8+.

Nine objects of five different colors are placed in the middle of the table. One card is turned over. It shows three items. The quickest to snatch the figurine which is neither shown in shape nor colour on the card, receives the card. If a figurine is shown in its original color, it is the one which needs to be snatched. If there is an owl, the sought-after item needs to be named out loud instead of grabbed. Many of these rules are familiar from the original Ghost Blitz. However, not only are four additional objects added to the game. When the "witching hour" starts ands the ghost is seen with a clock, the time it shows, must be called out. Also the magic mirror contributes its fair share: As soon as it shows an item, only this mirrored object is of importance - and all the other rules are null.