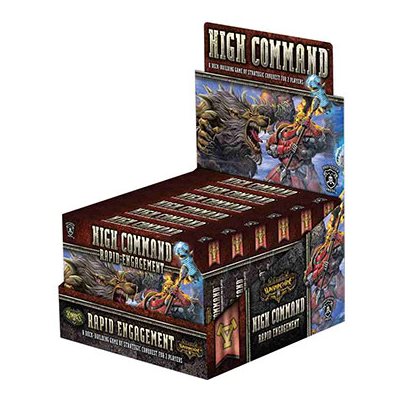 Press and move to zoom.
Mouse over image to zoom.
Click to enlarge
Privateer Press

AN EPIC CLASH BETWEEN STEAM-POWERED TECHNOLOGY AND NATURE'S FURY!

In the Iron Kingdoms, where magic and technology have combined to shape the course of history, the imperialistic nation of Khador wages war against the enigmatic Circle Orboros in a clash of steel and gunpowder versus fang and claw. Only one will claim ultimate victory.

High Command Rapid Engagement features everything two players need to engage in dynamic battle for the Iron Kingdoms. Leverage your resources and ray your armies to set your banner above all western Immoren!

This box contains game rules and 132 cards, including:

SPECIAL NOTE: High Command Rapid Engagement is only sold as an attractive POP display with six copies of the game.