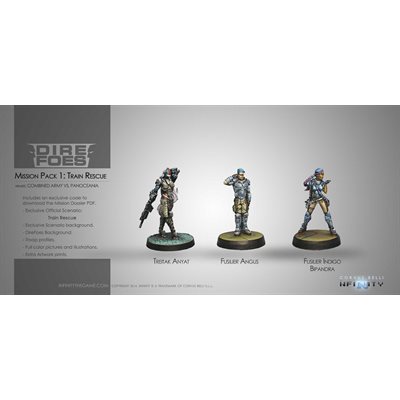 Angus did it again! Prisoner of the Yu Jing State Empire, two women will fight to rescue him, the Indigo Fusilier Bipandra spurred on by something more than loyalty, and the Treitak Anyat by the secrets Angus doesn't know he carries in his Cube. Find out what the fate of poor Angus will be with the “Train Rescue” mission and play this new scenario with its true protagonists!

Gauri Bipandra (or Bipandra Gauri, in the South Indian traditional style) is a fairly competent field doctor and a survival specialist. She has been forced into that role ever since fate dumped Fusilier Angus in her lap. She originally learned first aid and combat medicine by patching Angus up and keeping him alive long enough to reach a field hospital. She then built up her survival skills by keeping herself alive via the ordeals Angus puts her through on a regular basis.

Anyat is notorious throughout the Treitak Unit for her unscrupulous methods, her love for games of chance and her persistent presence in some of the most disreputable gambling dens. With a vast array of tricks up her sleeve, Anyat lets nothing stand in her way when on a mission, particularly if said mission would earn her favours and privileges.

Many regard Angus as a pest, the bane and blight of PanOceania. This man exists in the intersection between clumsiness, obliviousness and plain old bad luck. Angus is a mascot for the PanOceanian line infantry. His misadventures add a comic relief to the situation of every anonymous Fusilier who identifies with him: always sent into the thick of things, always getting the short end of the stick and coming off bruised, but alive.

Models are supplied unpainted, and some preparatory work may be required as well as assembly.