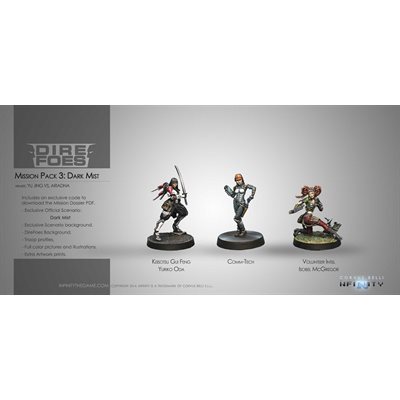 Clandestine actions into the deepest darkness! Intel Isobel MacGregor, an expert Caledonian data-thief, and Gui Feng Yuriko Oda, elite saboteur and Kempeitai killer, fight each other in the deepest darkness, and a poor Comm-Tech is caught in the middle of their struggle! To know what the final result of the “Dark Mist” mission will be, play this new scenario with its true protagonists!

Trying to get away from her family and the silly one-upmanship of Clan politics, Isobel joined the Intel unit and was detached to the technical adaptation programs put in place by Bureau Aegis to aid joint operations on Paradiso. With that training she became an information thief, an expert in cyberdefence and how to bypass it. She soon put her new found expertise to use well beyond the confines of the war against the Combined Army. Ariadna wanted some bargaining power in the cut throat arena of international politics, which meant it needed to take other people's secrets by force. That was not a problem for an Intel as motivated as Isobel, for whom every enemy, human or alien, is fair game. Nothing less is expected of a McGregor.

Double life? Double the risk! Only one thing is more dangerous than being a Gui Feng working for the Yanjing (“The Eyes”, Yu Jing’s Military Intelligence department), and that is being a double agent infiltrated into that special operations unit. Especially when you are an agent of the Kempeitai, the covert military organization that advocates Nipponese secession.

The Human Sphere would fall to pieces save for the unending work of Comm-Techs. Software applications are great. Research in quantronics is very important. But none of that is any good when the repeater in your block malfunctions and you can’t connect to the data sphere.

Models are supplied unpainted, and some preparatory work may be required as well as assembly.