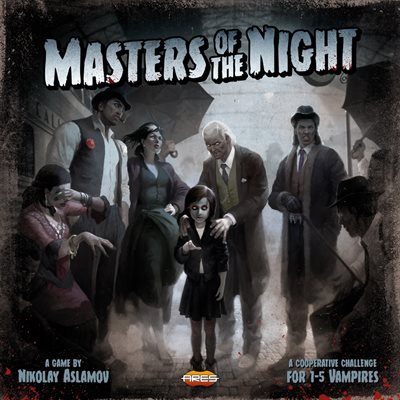 Press and move to zoom.
Mouse over image to zoom.
Click to enlarge
Ares Games

Masters of the Night is a solitaire or cooperative game, with one to five players playing on the same side, who will either win or lose together.

Players are members of a vampire clan slowly regaining their former power. With the help of their minions, they will fight against the agents of the Inquisition, cast fear into the hearts of the people with their hunts, and shape dread sigils in different city districts, all in preparation for the grand Blood Moon ritual that will confirm their grasp on the city and its fate. But beware, the longer they prepare for the ritual, the harder it will be to complete it. Enemies are searching for them constantly and when they find them, even vampire magic may not stop them!

Players must keep a compromise between using powerful blood-magic and keeping the Veil of Secrecy which protects them.