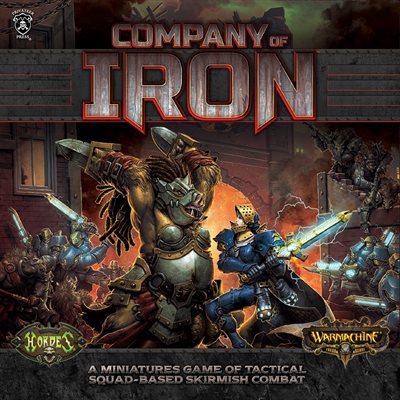 Press and move to zoom.
Mouse over image to zoom.
Click to enlarge
Privateer Press

The Company of Iron box set is designed for two players and will contain two 20-point armies, including a unit of Cygnar Stormblades and a unit of Minion Farrow Brigands. Additionally, two all-new character solos will be included to lead their respective units: Lieutenant Gwen Keller and Agata, Queen of Carnage. These new models can be used in both Company of Iron and in WARMACHINE and HORDES. All components needed to play the game are in the box set, including rules, tokens, and two types of cards that allow players to choose specialties for their squad leaders as well as battle plans that can provide powerful effects and advantages in combat.

Company of Iron uses the core rules of WARMACHINE and HORDES but has been tailored for the scale of the game and the absence of warcasters and warlocks. Emphasizing its fast-paced skirmish scale and the focus on small squads and solos, gameplay revolves around players taking turns activating one model at a time as opposed to the alternating activation in WARMACHINE and HORDES, in which players activate their entire army during a single turn.

“We have designed Company of Iron as an ideal entry point for new players who want to play in the world of WARMACHINE and HORDES,” said Chief Creative Officer Matt Wilson. “But it’s also a product the existing WARMACHINE and HORDES community has been requesting for years, and it scratches that itch for players craving a fast-paced tactical experience that can be played with a shorter time commitment.”