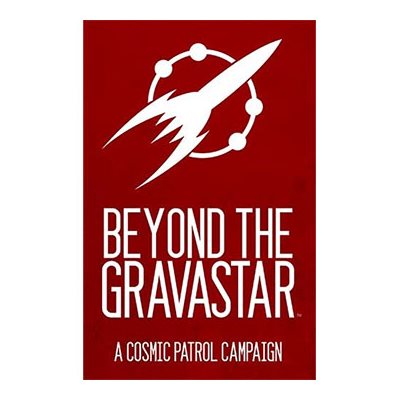 Cosmic Patrol Beyond The Gravastar (BOOK)

Cosmic Patrol is a roleplaying game set in a retro future based on the Golden Age of science fiction. If you’ve ever seen a cover from a classic 1930s-1960s sci-fi pulp magazine, you’ve got the idea. You and your friends form the crew of a Patrol rocketship and blast off for action and adventure in the wild galaxy!

The Metatherions and their powers to warp space and time threaten all life as we know it! And the only way for the Cosmic Patrol to fight them is by braving a trip through the Gern Gravastar, an extradimensional portal leading to the Metatherions’ native plane. However, the Gravastar is steadily growing in size, and nothing can slow it down. Unless it can be stopped, the Gravastar will eclipse whole systems, the entire galaxy - perhaps even the whole universe!

Beyond the Gravastar! puts players in the thick of the action as the Cosmic Patrol attempts to save the galaxy from total Metatherion domination. Included are detailed looks at the five, mysterious Metatherion races, their strange, extradimensional homeland, and other groups hoping to hasten or stall the Gravastar’s expansion. Also included are new Patrolmen dossiers, three mini-campaigns that center around the Gravastar and other dangers intent on wiping out the entire solar system, and more!