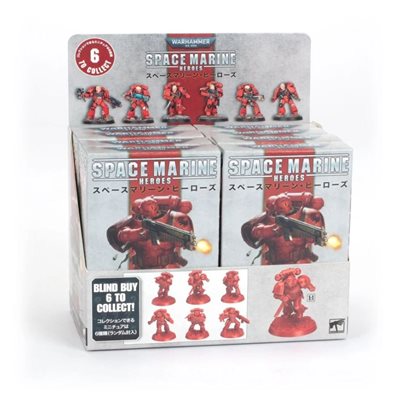 Press and move to zoom.
Mouse over image to zoom.
Click to enlarge
Games Workshop

Space Marines are superhuman warriors, appointed by the Emperor to defend his vast Imperium. Clad in mighty power armour and armed with devastating weapons, they stand steadfast in the face of a galaxy full of horrors.

The Blood Angels are among the greatest of the Space Marine Chapters. They are superlative warriors and graceful in their endeavours, but their angelic features and finely decorated armour hide a dark secret that may one day overwhelm them, and drive them to madness.

Space Marine Heroes 2023 – Blood Angels Collection Two brings you a selection of six of these towering warriors, armed with a variety of weapons with which to eviscerate their enemies.

Each Space Marine Heroes miniature is a multipart plastic model, cast in red plastic and supplied with a textured rubble base. These kits are push-fit and push-off the frame – so no glue or clippers are required to assemble them. Each has a single unique pose and can be assembled with your choice of a bare head or helmet. These miniatures are supplied unpainted and require assembly – we recommend using Citadel Colour paint.