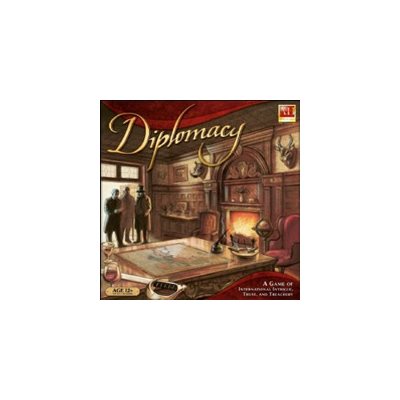 Diplomacy is a strategic board game created by Allan B. Calhamer in 1954 and released commercially in 1959.Its main distinctions from most board wargames are its negotiation phases (players spend much of their time forming and betraying alliances with other players and forming beneficial strategies)and the absence of dice and other game elements that produce random effects. Set in Europe in the years leading to the Great War, Diplomacy is played by two to seven players,each controlling the armed forces of a major European power (or, with fewer players, multiple powers). Each player aims to move his or her few starting units and defeat those of others to win possession of a majority of strategic cities and provinces marked as "supply centers" on the map; these supply centers allow players who control them to produce more units.

In the game, players represent one of the seven "Great Powers of Europe" (Great Britain, France, Austria-Hungary, Germany, Italy, Russia or Turkey) in the years prior to World War I. Play begins in the Spring of 1901, and players make both Spring and Autumn moves each year. There are only two kinds of military units: armies and fleets. On any given turn, each of your military units has limited options: they can move into an adjoining territory, support an allied unit in an attack on an adjoining territory, support an allied unit in defending an adjoining territory, or hold their position. Players instruct each of their units by writing a set of "orders." The outcome of each turn is determined by the rules of the game. There are no dice rolls or other elements of chance. With its incredibly simplistic movement mechanics fused to a significant negotiation element, this system is highly respected by many gamers.

In its catalogue, Avalon Hill advertised Diplomacy as John F. Kennedy and Henry Kissinger's favourite game. Kissinger described it as his favourite in an interview published in a games magazine.Authors Isaac Asimov and Ray Bradbury,and American broadcast journalist Walter Cronkite were also reported to be fans of the game. British journalist, broadcaster, and former Member of Parliament and Cabinet Minister Michael Portillo is known to have played the game whilst studying at Harrow County School for Boys.