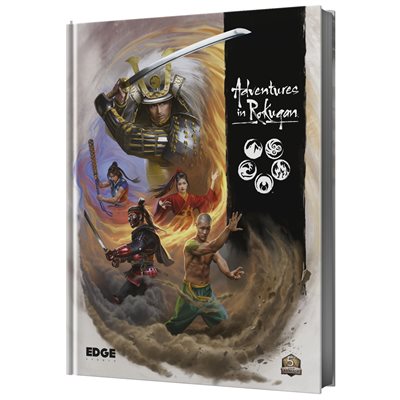 Press and move to zoom.
Mouse over image to zoom.
Click to enlarge
Edge

For thousands of years, the samurai of the Great Clans have served the Hantei Emperor in guiding this land’s destiny. But now, danger besets Rokugan on all sides. While the Great Clans march to war with one another, blood magic users corrupt the Empire from within, the spirits of the restless dead haunt its wilds, and to the south, hordes of foul oni batter against the Kaiu Wall, the last defense against the vile demons pillaging Rokugan.

With the Great Clans distracted on all fronts, it falls on brave warriors and adventurers to protect the common folk and fight these threats. Do you have what it takes to defeat these ancient evils and ensure the Emerald Empire stands for another thousand years?

Adventures in Rokugan brings the famous setting of Legend of the Five Rings to the ever-popular ruleset of the 5th Edition SRD. Players can explore this rich setting in a whole new light, and the familiar rules promise to engage an entirely new audience of roleplaying fans.

Alongside a new focus on roleplaying activities such as dungeon delving and monster hunting, Adventures in Rokugan promises to provide something for all fans of Rokugan.